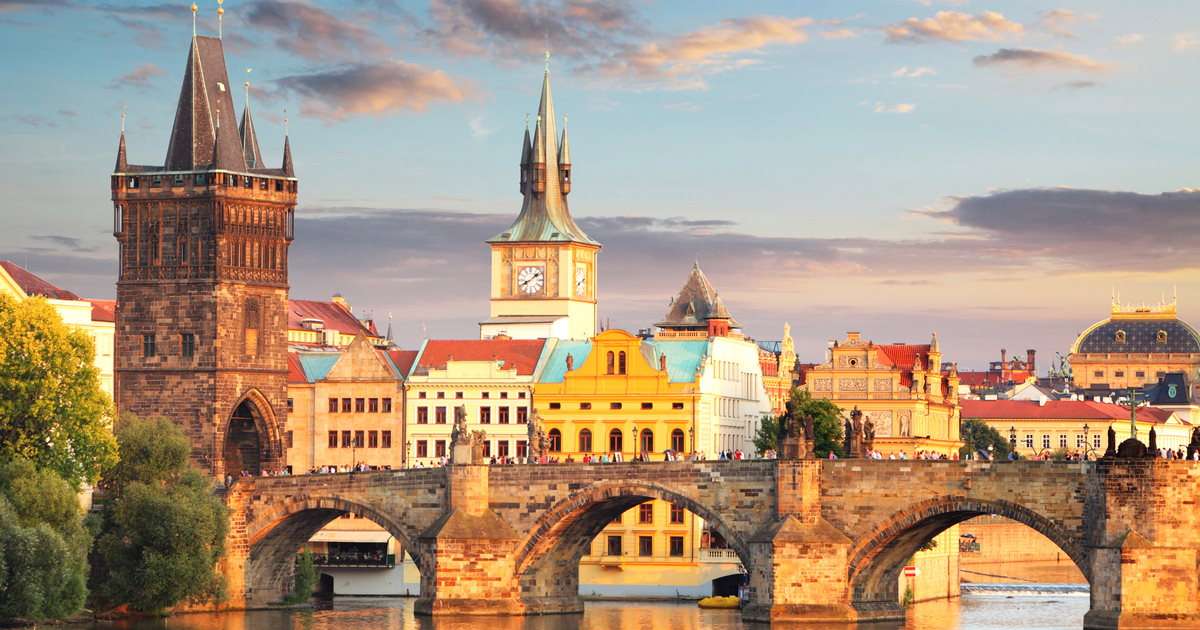 Charles Bridge is one of the oldest stone bridges in Europe.

It connects the Old Town (Staré Mesto) with the Lesser Town (Malá Strana).

This bridge over the Vltava River is bordered by two towers and is open only to pedestrians. It is bustling with activity almost around the clock.

What Can I Do at Charles Bridge?

The Old Town Bridge Tower is located on the Staré Mesto side of the Old Town of Prague. It was built in 1370 under Emperor Charles IV and today it is considered one of the most beautiful Gothic towers in Europe.

138 steps lead up into the tower to the viewing level. There you can enjoy a fantastic view of the Vltava River and the Old Town of Prague.

On the east side of the tower, the coats of arms of all the countries that belonged to the Czech Kingdom at the time of the bridge's construction, that of the Roman emperor, and a symbol of Wenceslas IV are carved in sandstone. A seated sculpture of Charles IV adorns the tower.

Once the tower also served as a political center. From 1621 to 1631, the heads of 27 executed rebels against the Habsburgs were pinned to poles here as a deterrent. Today, a memorial plaque commemorates the events.

The Lesser Town Bridge Tower is the lower of the two towers, it is connected by a gate with the former Judith Tower and forms the entrance to the Charles Bridge from the Lesser Town. It was built in 1464 in the Romanesque style, its design was similar to that of the Old Town Bridge Tower. Its reconstruction in the Renaissance style took place in 1591. On its eastern side one can find reliefs in the form of arches with stylized turrets attached.

The tower is 45 meters high and can also be climbed. The observation gallery is located at a height of 26 meters and offers a magnificent view of the Vltava River and the city.

One of the approximately 30 statues of saints on Charles Bridge is that of St. John of Nepomuk, which was erected in 1683. According to legend, the queen's confessor incurred the wrath of King Wenceslas IV because he would not reveal what the queen had confessed to him. After an embarrassing interrogation in 1393, Wenceslas IV had him thrown into the Vltava River to cover up traces of torture.

Today it is said to bring good luck to touch the relief of the saint. The dog on the left side and the torso and skirt of a woman on the other side of the figure have been stroked spotless.

Charles Bridge is very busy almost 24 hours a day. Musicians play songs and numerous vendors sell souvenirs and art, you can have your portrait painted or caricatured with a few strokes.

From Charles Bridge you have a unique view of the Vltava River as well as Prague Castle. Below the bridge are historic boats, the Prague "Venice ferries". Every year on May 15, the "Navalis" festival takes place on the water around the bridge. Baroque music, fireworks, gondolas, and regattas commemorate St. Nepomuk, one of the patron saints of the gondoliers.

How Do I Get to Charles Bridge?

Charles Bridge can be reached by metro line A, green line, via the Staromestská stop in the Old Town and via the Malostanská stop on the Lesser Town.

In addition, streetcar lines 17 and 18 go to Charles Bridge.

History of the Bridge

Charles Bridge is the oldest preserved bridge over the Vltava River and one of the oldest stone bridges in Europe.

The foundation stone was laid by Emperor Charles IV on a date calculated by astrologers as particularly auspicious, July 9, 1357. The stone bridge of Regensburg served as a model. It was completed in 1402.

Between 1683 and 1928, 30 sculptures were placed on the bridge piers, the most famous being that of St. John of Nepomuk from 1683, the touch of which is said to bring good luck.

The royal road of the Bohemian kings also led across Charles Bridge to Prague Castle.

The bridge got its present name only in 1870, until then it was simply called "Stone Bridge". It was open for horse-drawn streetcars since 1883 and for electric streetcars at the beginning of the twentieth century.

Today it is accessible only to pedestrians.